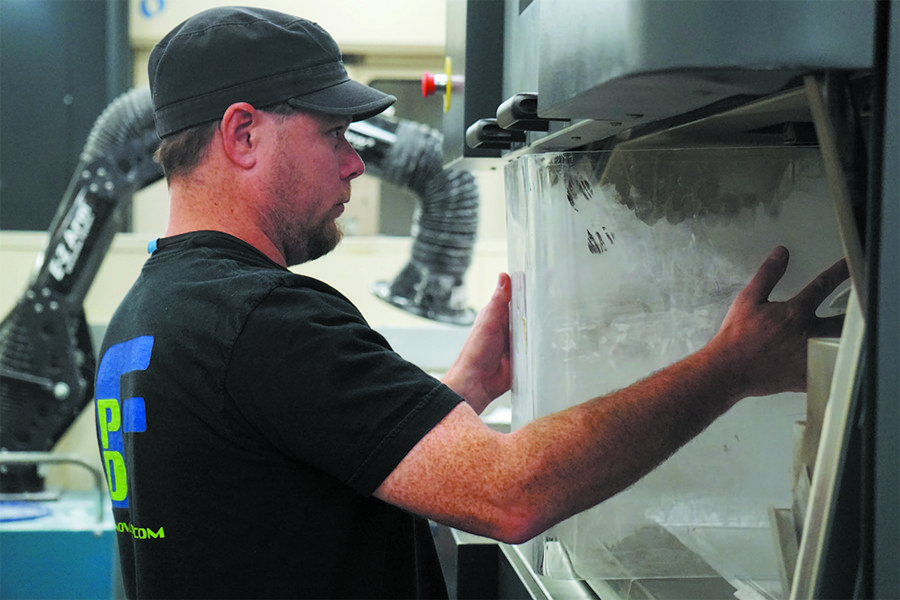 Inside a machinery-laden production space at Eastman Business Park, Ian Finn dredges a clear plastic container into the wide mouth of a 3-D selective laser sintering (SLS) machine. He loads up the container with fine white powder, dumping it into a nearby trough. As the powder is dusted away, plastic wedges begin to appear — the contact component of a robotic arm soon to be sent off for factory use.

Finn is the proprietor of Finnovation Product Development, Rochester’s only large-scale 3-D printing operation. Finnovation generally contracts machine parts and factory components, and while Finn is quiet about his clients, he said his products are in use around the globe.

Three-D printing, or additive manufacturing, has been around since the 1980s, but advances in the technology in the 2000s have pushed the sector further into the mainstream. Finnovation opened its doors in 2009, and has only seen its clientele grow over the past decade. For clients, it’s often a combination of affordability and the ability to avoid additional equipment that gives Finn’s 3-D printed parts a leg up.

“They could injection mold these,” Finn said, holding one of the plastic wedges pulled from the printer. “But the injection mold will probably be 15-20 grand. So, for them, when they’re selling only five machines a month, they might only need 20 or 30 of these a month. That doesn’t really justify buying the injection mold.”

It costs Finn about $5 to make one of those parts, which he’ll in turn sell for about $22. The SLS machine costs roughly $250,000. As it works, a layer of extremely fine nylon is laid and smoothed out in the machine. A high-powered laser then works its way across the surface, following whatever design it’s fed. The laser effectively welds together nylon molecules into a single piece, at which point a second layer is spread on, and the laser repeats its duty until the design is fully welded together.

“We call it additive manufacturing. Think of traditional manufacturing where you’re building a part out of a piece of metal,” Finn said. “Essentially, all you’re doing is cutting away the metal you don’t want until you have your part, so we call that subtractive manufacturing. We’re doing the exact opposite—we’re creating something out of adding materials together.”

The more familiar variety of 3-D printing is fused deposition modeling. In that process, a base material, be it a plastic or metal, is heated and laid down in fine layers following the design fed to the machine. These are the variety of 3-D printers you will find at high schools, libraries and the printing lab of RIT’s The Construct makerspace.

The Construct is a tech playground where upwards of 1,200 students per semester come to experiment, build and put their imaginations to the test. Everyone from the RIT Launch Initiative — which lofted a 10-foot rocket 10,000 feet last year — to artists and budding entrepreneurs call the space home. It’s free to students, faculty and RIT alum.

The printing lab is a small chunk of The Construct, boasting a wall of small, $200-$300 printers used for experiments, research and modeling.

“Here, it’s just experiential learning, playing with the technology and seeing what you can do with it,” said makerspace manager Mike Buffalin. “If they want to come and print Pokemon, they’re more than welcome to.”

It’s not just toys, however. Behind a glass wall at The Construct sits an array of odd plastic instruments, from an electric violin to a Les Paul-style electric guitar with a strange, honeycomb-like body. This is the AMPrint Center, a 6,000-square-foot space fit with $4.5 million worth of 3-D printing equipment. That facility opened in 2016 and is valued at $18 million. Of that, $9.2 million was committed by Empire State Development over the course of 10 years.

“I love that we have the windows here, because people can look in and see all of the cool things we have here, like all of these instruments,” Buffalin said. “But it’s not just cool things we can build, it’s that you can look at that guitar and say, well, that’s a business. What I think this place does is allow entrepreneurs to try new things and experiment with their ideas.”

Collaboration becomes a key focus of that endeavor, and The Construct is not shy about that. Many of the projects and concepts used at The Construct are opensource, a concept used by RIT’s own e-NABLE chapter members. e-NABLE is a global effort to design prosthetic, usable limbs that can be printed and fitted to amputees at low cost. All of e-NABLE’s designs are free and open to the public.

Finn, a self-described “gunguy,” takes a dim view of the recent controversy over guns produced by 3-D printers.

“A 3-D printer would be the absolute last tool I’d use to design or make a gun,” he said. “They don’t offer strong materials—it’s not a safe option.”

Such guns are designed to be produced with at-home, consumer-grade printers, which retail for as low as $200 on Amazon. While Finn notes there are metal printers that could potentially make safe, reliable gun parts, they cost around $1 million, making them inaccessible to the average person.

“You know, those (designs) have been around for about a decade—they’re not anything new,” he said. “And honestly, if I was going to build a gun, I could go to the hardware store and get just about everything I need. Whatever comes out of a 3-D printer is not going to be reliable.”

The negative publicity, both Buffalin and Finn said, is a shame for an industry that has enormous potential in virtually every conceivable space. Buffalin pointed to a new method for printing 3-D colored models, which doctors could use to practice surgical procedures based on a specific patient’s body.

Finn pointed to the ability to produce functional machine parts for about a quarter of the cost of traditional manufacturing. It’s a space where materials, processes, techniques and the very technology has become refined enough to show its real-world applications, Finn said.

“It’s refined to the point that we can produce parts on a 3-D printer that are as good as an injection molded part and don’t require that initial investment in tooling,” Finn said. “For that, it’s the holy grail.”