*** FPD does not condone using 3D Printers to print weapons ***

Under increasing pressure from the US State Department, blueprints for the production of a plastic gun made with the use of 3-D printers, have been removed from the internet. Just two days after publishing the blueprints for making plastic gun, and over 100,000 downloads later, the government decided to step in and pull all access to the files. 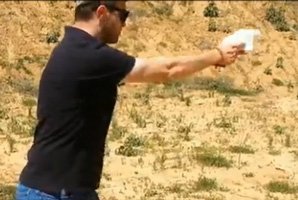 The designer of the prototype 3-D plastic gun, 25 year-old law student Cody Wilson, who is also the founder of the Defense Distributed group, "successfully" printed the first-known plastic gun on a Stratasy Dimension SST 3D printer. According to sources close to the designer of The Liberator, as it was named, 15 of the gun's 16 essential parts are made from plastic. They are reportedly able to pass through airport security screenings and other common metal detectors.

The first successful test fire of the plastic pistol was conducted in early May of 2013, and as expected, the controversy that surrounded its early success, was swift and immediate. One of the first lawmakers to chime in was Texas Senator Charles Schumer (Dem NY), who motioned for an immediate call to ban the manufacturing of all printable firearms and weapons.

While this clearly raises numerous issues, on both the side of increased gun control and increased gun freedoms, it is also virtually guaranteed to be used as ammunition among those who are dedicated to eradicating the web freedoms we enjoy today. Wilson's group is a not-for-profit organization that, ironically enough, works to defend the right of law abiding citizens to keep and bear arms. Personally, I feel that releasing untested and unregulated firearms into the public domain is highly irresponsible. If Cody Wilson truly has the public's interest in mind, then I believe he would not arm the public with unreliable and unsafe firearms.

A Future for 3D-Printed Plastic Guns?

This may be the first plastic gun manufactured, using (almost) nothing more than plastic polymers and state-of-the-art 3D printing technology, but it certainly will not be the last. As the technology of 3D printing evolves, we are going to hear more and more cases just like the one surrounding Cody Wilson.

Fortunately, the government moved swiftly in this case. Finnovation Product Development does not support or condone the covert and unregulated manufacturing of firearms. FPD supports responsible and legal ownership of U.S. government regulated guns and firearm manufacturers who use 3D printing in accordance with the public's interest.

As an owner of production grade 3D printing technology, I choose to let the experts design test and manufacture reliable firearms in accordance with the law. Finnovation will continue to focus on beneficial ways to employ 3D Printing technology that enrich human life. If you require a gun, then please pursue a safe and regulated option. If you would like to use 3D Printing to change the world in a positive way, then Finnovation Product Development is here to help!